In holding the magazine ban violated the Constitutional right to “keep and bear arms”, Judge Benitez explained our inherent right of self-defense under the U.S. Constitution and that "for laws that do impair self-defense, strict scrutiny" is applicable.  "A law that imposes such a severe restriction on the fundamental right of self-defense of the home that it amounts to a destruction of the Second Amendment right is unconstitutional under any level of scrutiny." Duncan v. Becerra (S.D. Cal., Mar. 29, 2019, No. 3:17CV1017-BEN (JLB)) 2019 WL 1434588, at *10 (citing, Silvester v. Harris, 843 F.3d 816, 821 (9th Cir. 2016)).

Judge Benitez ultimately concluded, “California’s law prohibiting acquisition and possession of magazines able to hold any more than 10 rounds places a severe restriction on the core right of self-defense of the home such that it amounts to a destruction of the right and is unconstitutional under any level of scrutiny.” A.B. 392 imposes far more severe impairments on officers' right of self-defense in several important respects.  First, if officers attempt to detain or arrest the wrong person by mistake, they are stripped of their right of self-defense if that person attempts to kill or injure the officer (under this scenario an otherwise justified use of deadly force constitutes manslaughter).  Officers are also stripped of their right not to retreat in the face of resistance or threat posed by a suspect to themselves or others.

Most significantly, officers are subjected to a watered down right of self-defense by requiring them to utilize the least intrusive means of self-dense rather than objectively reasonable means based upon the totality of the circumstances.  Officers will be stripped of their right to self-defense and subject to criminal jeopardy any time a critic can conjure up an alternative to force.  For example, if a suspect three feet away draws and aims a handgun at an officer, it will take the officer about 1.5 seconds to perceive this threat, decide to draw his or her gun, and shoot at the suspect. Nearly everyone would agree the officer’s decision was an objectively reasonable use of deadly force. However, under A.B. 392 that officer’s right of self-defense would hinge on the “reasonableness” of the officer’s alternatives, such as the use of a gun take-away technique or quickly advancing on the suspect and knocking him off balance and taking him to the ground.


“In the heat of battle with lives potentially in the balance, an officer would not be able to rely on training and common sense to decide what would best accomplish his mission. Instead, he would need to ascertain the least intrusive alternative (an inherently subjective determination) and choose that option and that option only. Imposing such a requirement would inevitably induce tentativeness by officers, and thus deter police from protecting the public and themselves. It would also entangle the courts in endless second-guessing of police decisions made under stress and subject to the exigencies of the moment.” Id.

This new Second Amendment case highlights the unconstitutionality of A.B. 392.  The last time the U.S. Supreme Court addressed the Second Amendment, it explained, "self-defense is a basic right, recognized by many legal systems from ancient times to the present, and the Heller Court held that individual self-defense is 'the central component' of the Second Amendment right." McDonald v. City of Chicago, Ill. (2010) 561 U.S. 742.  On the horizon, the U.S. Supreme Court recently granted review in a case involving a New York City law that limits residents from transporting their guns outside their homes and is widely expected to invalidate this law and further expand recognized self-defense rights outside the home.

It should also be noted that the California Constitution provides a similar, if not stronger, express right of self-defense in Article I, Section 1.  (see, People v. McDonnell (1917) 32 Cal.App. 694 (recognizing, that "[t]he right to defend life is one of the inalienable rights guaranteed by the constitution of the state.”) 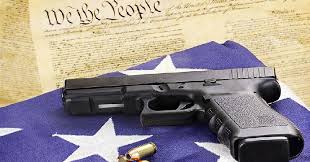