The Sacramento Bee reports that the California Democratic Party has voted to officially oppose Proposition 32, which would restrict union political fundraising by prohibiting use of payroll-deducted funds for political purposes.  CPF and PORAC are already aggressively opposing Prop 32.
Posted by Mastagni.com Law Blog at 8:30 AM 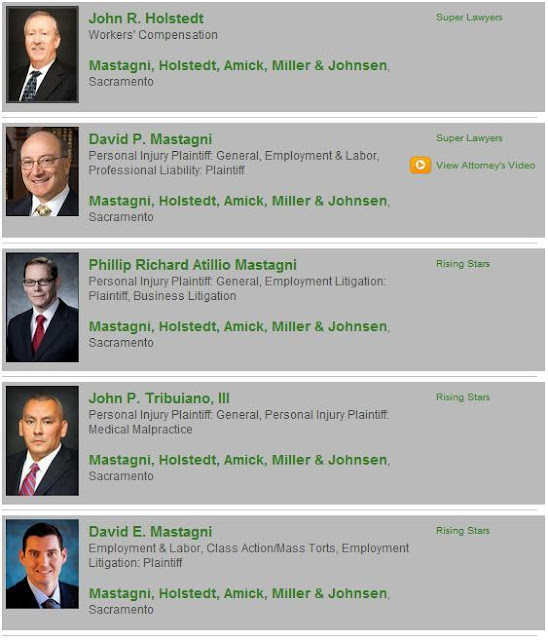 Posted by Mastagni.com Law Blog at 7:30 AM

Just months after the Stockton Record blew the whistle on city council members accepting questionable payouts, city officials face new allegations of wrongdoing.  The Record reports that city manager Bob Deis is being investigated for battery on a high school teacher/protester in front of city hall.  At the same time, former police chief Blair Ulring withdrew his application to be the police chief of Spokane, Washington after local press there "questioned the validity of Ulring's diplomas."  Watch the video report on Ulring here.

The Supreme Court recently upheld union free speech.  The Court struck down a Montana law restricting the ability of unions and other corporations to expend funds for political purposes. The Montana law stated a corporation may not “make an expenditure in connection with a candidate or a political committee that supports or opposes a candidate or a political party.” A small group of organizations including Montana Shooting Sports Association filed a lawsuit arguing that the law interfered with their First Amendment right of free speech.

In American Tradition Partnership, Inc. v. Bullock, the Court agreed, holding Montana's law directly conflicts with the U.S. Constitution. The Court’s decision relied heavily on the prior decision of Citizens United v. Federal Election Commission. In Citizens United, the Supreme Court ruled the First Amendment prohibited the government from overly restricting independent political expenditures by corporations and unions. The ruling effectively frees unions to spend money on elections and to directly advocate for the election or defeat of candidates (although not to contribute unlimited amounts directly to candidates or political parties). The Court’s decisions validate the reason why people formed unions in the first place: to give workers the freedom to come together to voice their concerns and fight for their members.
Posted by Mastagni.com Law Blog at 8:00 AM

The Sacramento Bee reports San Diego mayor Jerry Sanders was "grilled" for more than five and a half hours during last week's hearing at the Public Employment Relations Board.  Sanders and the City face scrutiny at PERB over their attack on employee's retirement security.  PERB granted the unions' request for injunctive relief in February, but a San Diego Court stalled the process temporarily.  Then, in June, PERB won the right to proceed at the Court of Appeal.  Now, PERB is processing the complaint and an administrative law judge will rule whether the City violated the MMBA by putting the pension measure on the ballot without meeting and conferring with the unions.  Both sides are expected to appeal regardless of the outcome.
Posted by Mastagni.com Law Blog at 8:00 AM

In the first hearing since Stockton’s June 28, 2012 filing of a bankruptcy petition, Judge Christopher M. Klein established firm control over the proceedings. This initial hearing focused on motions brought by the City of Stockton to lift the statutory confidentiality of its pre-bankruptcy negotiations under A.B. 506, notice to creditors, and scheduling deadlines for anticipated challenges to Stockton’s eligibility to file bankruptcy.

After a thoughtful discussion of competing interests, Judge Klein denied Stockton’s request for permission to disclose confidential communications made during the A.B. 506 pre-bankruptcy process. The California statute provides that negotiations during the 506 process cannot be disclosed except by court order if necessary to challenge the City’s bankruptcy eligibility. Judge Klein followed federal evidence rules providing for confidentiality of settlement negotiations with similar exceptions for information needed to determine eligibility for bankruptcy. The court explained the issue could be revisited if the information becomes necessary to determine eligibility. The Court did authorize the disclosure of the number and length of 506 meetings, the participant, the subject matters discussed, and the City’s “Ask” (the requested plan of adjustment).

Challenges to eligibility typically involve disputes over insolvency and/or the requirement that the City negotiated with creditors in good faith during the 60-90 days of the AB 506 period. Good faith negotiations are also required under federal bankruptcy law. A representative from the capital market indicated that it may challenge the City’s method of claiming insolvency on a budgetary basis as opposed a cash flow basis (an inability to pay obligations as they come due). Assured Guaranty, which insured $161.4 million of Stockton’s bonds, publicly stated it intends to vigorously enforce its rights as a creditor in any Chapter 9 proceeding, including the right to contest eligibility and confirmation of any plan of adjustment proposed by the city.

Judge Klein modified the City’s proposed timelines, setting a deadline of July 20th was set for the City to submit all its evidence of eligibility for bankruptcy and August 9th for filing objections to the City’s eligibility. A status conference before the Judge will be heard on August 23, 2012 at 10:00 a.m. for discussing discovery, motions, pretrial and trial setting for challenges to eligibility. Judge Klein also authorized the Stockton Police Officers Association (SPOA) to set a noticed motion to lift the stay over disciplinary appeals. After filing the Petition on June 28th, the City has taken the position that it will not proceed with appeals of disciplinary actions imposed against police officers. The City argues that because the appeals involve potential back-pay they are automatically stayed by the bankruptcy. While evaluating potential challenges to the City’s eligibility, the SPOA continues to negotiate with the City over its plan of adjustment.

Chapter 9 requires as a condition of confirmation that a majority of each classes of claims impaired accept the plan. Although Chapter 9 also includes “cramdown” provisions requiring only acceptance of one class of claims, the court informed the City that it did not intend to simply confirm the City’s plan of adjustment. Rather Judge Klein told the City it would have to negotiate a plan of adjustment with its creditors, likely requiring further mediation.
Posted by Mastagni.com Law Blog at 3:00 PM

Email ThisBlogThis!Share to TwitterShare to FacebookShare to Pinterest
Labels: bankruptcy 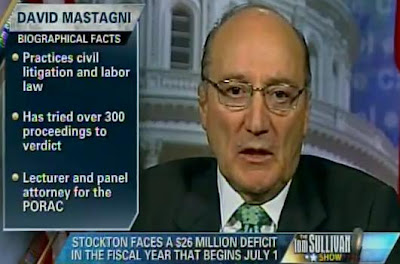 Mastagni Law partner David P. Mastagni recently appeared on the Fox's Tom Sullivan Show to explain why California cities, including Stockton, are trying to scapegoat public safety professionals and violate their contractual obligations.  He explained that in light of what cities are doing with their contracts, "you dont have to be an Apache Indian or Geronimo to understand what the government thinks of its contractual obligations."

The real problem is that cities made "bad business judgments" by approaching infrastructure projects like it was "college lab class," investing other people's money in ventures they knew little about.  Now that cities are seeing red, they're blaming police officers and firefighters, but "blaming the police is nothing but a red hering."

In Meeks Building Center et al. v. WCAB and Salem Najjar (June 26, 2012, C065944; WCAB No. ADJ4255212), the Third District Court of Appeal vindicated an injured worker's rights after his employer tried to use a legal technicality to cut off his temporary disability prematurely. After Salem Najjar was injured on the job, his employer sent him to a qualified medical evaluation to learn more about his injuries.  He saw the doctor on September 11, 2007 and received $64.71 for the wages he lost that day.

The case started after the “Comprehensive Pension Reform Initiative” (CPRI) qualified for the ballot in San Diego. The initiative amends San Diego’s charter to impact retirement benefits for employees. The Municipal Employees Association (Association) filed an unfair labor practice charge alleging the City failed to meet and confer as required under the MMBA before placing the CPRI on the ballot.

PERB issued a complaint against the City and authorized its general counsel to file for an injunction. However, the trial court denied PERB’s motion to enjoin the City from placing the initiative on the ballot. The trial court also granted the City’s motions to stay the administrative proceedings and quash PERB's subpoenas. The Association then filed a writ in superior court.

The City argued PERB did not have jurisdiction over the Association’s claims as it involved a dispute over the constitutional free speech rights. The Court found while constitutional rights may be implicated it was not sufficient to divest PERB of its exclusive initial jurisdiction to consider the Association’s claims. The City also claimed go through the PERB process since PERB had already sought temporary injunctive relief and its neutrality was compromised. The Court disagreed the City’s argument that going before PERB would be futile. The Court also found the trial court erred in ordering a stay of the PERB administrative proceedings and let PERB proceed with the unfair practice charge.
Posted by Mastagni.com Law Blog at 9:00 AM