On September 11th 2020, Governor Newsom signed into law AB 2147. With its passage, inmate firefighters are now free to pursue a professional career in firefighting after the end of their prison term. 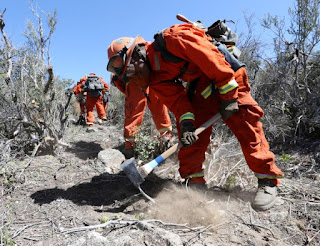 Currently, the California Department of Forestry and Fire Prevention collaborates with the Department of Corrections and Rehabilitations to operate conservation camps. These are minimum security facilities that inmates can volunteer at. During their volunteer time, inmates receive training while assisting in fighting local fires.

Under AB 2147 certain non-violent offenders that have participated in the conservation program can request that a court expunge their conviction after release.  Importantly, due to AB 2147, a qualifying ex-con may now receive EMT certification where they previously could not. According to the legislations sponsors, this eliminates any concerns that the former inmate is unable to receive EMT certification, thus opening “a pathway to recidivism.”

The Governors press release on the bill can be read here.

On September 9, 2020, the Federal District Court in the Southern District of California granted California Statewide Law Enforcement Association’s (“CSLEA”) and the State’s motion to dismiss CSLEA members’ complaint. Some CSLEA members brought the lawsuit alleging CSLEA and the State violated their First Amendment rights by (1) refusing to accept their resignation from union membership, (2) continuing to deduct union dues from their paychecks, and (3) forcing them to join the union by threatening fees.

The CSLEA members bringing the claim were lifeguards employed by the Department of Parks and Recreation. When they joined CSLEA, their membership application included a provision authorizing dues deductions from their wages and limitations on the time period in which they could withdraw membership. According to their memorandum of understanding (“MOU”), membership had to be withdrawn during the thirty days before expiration of the MOU. When the claimants joined CSLEA, agency fees or “fair share” fees from non-members were still allowed.

In 2018, the United States Supreme Court decided Janus v. AFSCME, Council 31, 138 S. Ct. 2448 (2018) and held that the deduction of agency fees from non-members of a union violated the nonmembers’ First Amendment rights absent actual consent.  The claimants decided to withdraw their union membership based on that decision. However, their withdrawal was denied because it was not within the permitted withdrawal window and dues deductions continued. According to their MOU, membership had to be withdrawn during the thirty days before expiration of the MOU.

The court considered Janus and determined that First Amendment concerns were not implicated because the claimants had affirmatively consented to union membership. Janus does not apply to voluntary agreements.  Rather, Janus specifically held that nonmembers cannot be required to pay union fees because it forces nonmembers to subsidize private speech they never agreed to. However, these lifeguards were union members because they agreed to join the union, consented to the deductions and consented to the membership withdrawal limitation. Therefore, their claim was invalid and the federal district court dismissed their claim.

Subsequently, the ninth Circuit issued a decision which should resolve similar claims throughout the state of California. On September 16, 20202, the Ninth Circuit upheld members' agreements that authorized the state to deduct dues and remit them to the union, which were irrevocable for one year.  Belgau v. Inslee --F.3d--, 2020 WL 5541390 (9th Cir. 2020) The Court explained that the state did not violate state employees' First Amendment rights by continuing to deduct union dues until the end of the one-year period from employees' paychecks after they revoked their union memberships.  The Court emphasized the difference between a nonmember being compelled to pay versus a member who affirmatively signed up to pay by agreeing to be a union member. Similarly, the claimants in Belgau were Washington State employees who opted into union membership and withdrew membership after Janus was decided. Although their withdrawal was approved, the union continued deducting dues for a year according to a provision of their collective bargaining agreement.

In Belgau¸ the Ninth Circuit noted that rather than being a state action, the deduction of dues was a private agreement between the consenting members and the union. Furthermore, by the time the claim reached the Ninth Circuit, the claim was moot. Deductions stopped after one year, as listed in the agreement.  The state employees argued that those deductions violated the First Amendment as held in Janus because they no longer consented to pay dues. But the Court noted that “the First Amendment does not support Employee’s right to renege on their promise to join and support the union.” The union is not a state actor under Section 1983. Based on their voluntary consent, the Ninth Circuit upheld the lower court’s dismissal.

During the August 26, 2020, Commission on Peace Officer Standards and Training (POST) Zoom meeting, the Commission discussed the impacts of Senate Bill 731 (Bradford). SB 731 as currently drafted empanels a Board to review peace officer misconduct under the supervision of the POST Commission.  While a decertification process is broadly supported by law enforcement, SB 731 contains several controversial provisions that violate long standing principals of due process, fairness, and impartiality.

David E. Mastagni testified against the Bill at today’s hearing, expressing support a fair decertification process, but pointing out the flaws infecting this legislation.  For instance, the details of the revocation procedure represent a stark departure from the decertification procedures utilized in other states, such as Florida and Georgia. SB 731 subjects officers to double jeopardy and potential inconsistent determinations.  The sweeping scope of the investigative Board’s authority is not even constrained by a finding of innocence by the employing agency or the court determinations overturning Agency findings of misconduct.

The Board must be comprised of a majority of individuals with no expertise in police practices or use of force, and who lack impartiality.  For example, the Board must include a person or surviving family member of a person subjected to wrongful use of force likely to cause death or serious bodily injury by a peace officer and four (4) members who are members of community-based organizations on issues related to police misconduct or of non-profits working on police misconduct issues.  Under the rule of law, impartiality is required of those vested with authority to determine a person’s fate or livelihood.  The ability of this Board to be objective, uninfluenced by emotion or surmise, and not to prejudge an investigation based on personal experiences is questionable at best.  Moreover, officers have no POBR rights under the POST process and are entitled only to a “review” of it determination.  Similarly, the POST Commission is stripped of meaningful oversights, as the Bill mandates the Commission “shall adopt the board’s recommendation unless it is without a reasonable basis.”

During today’s POST meeting, Executive Director Alvarez explained that investigations and decertification would require a major expansion of POST infrastructure.

Director Alvarez expects that this major expansion would require POST to more than double its staff size and open two new offices in Southern California and the Bay Area. The staffing and buildings alone were estimated to cost $40 million dollars. The staff and location increases are expected because the certification program would require a new platform to collect misconduct complaints and secure information obtained during the investigations. One Commissioner mentioned that this estimate doesn’t even account for the huge legal costs associated with this type of certification system.

Law Enforcement supports a decertification process which strikes the proper balance by holding bad officers accountable while maintaining fundamental principles of due process and fairness.  After working for months to establish such a licensing system, law enforcement was very disappointed to see the newest version of the bill which eliminated meaningful due process and fairness.  Notably, at the Judiciary hearing today, several of the Assembly Members who voted for the Bill expressed grave reservations and asked Senator Bradford to consider further amendments to address their concerns.