Judge Orders Relative of Suspect to Stay Away from Officers, Families

The San Joaquin County Superior Court issued a permanent restraining order protecting two Manteca police officers and family members from harassment by the brother of a suspect killed in an officer-involved shooting in June 2011.  Family members of the suspect have been holding group protests for several months and approached family members of one officer at an amusement park.

The restraining order prohibits the suspect's brother from coming within 25 yards of the officers at the Manteca police department and within 100 yards anywhere else, including the officers' homes and child's school.  It also prohibits him from attempting to contact them in any way.  The order further prohibits the suspect's brother from possessing firearms or ammunition and orders him to dispose of any firearms or ammunition with 24 hours.  The restraining order has a three year term.  Mastagni Law attorneys represented the police officers in the matter.  More information about the case is available here.
Posted by Mastagni.com Law Blog at 12:00 PM

The Stockton Police Officers Association went to court Wednesday to force the city to honor its duty to pay officers for unused sick and vacation time when an officer laterals to another department.

According to the Stockton Record, the city suspended the cash payouts to departing employees even though police officers took their jobs with the understanding they were earning the cash payouts when their work was done.

"People are entitled to this," said attorney David E. Mastagni, who represents the police union. "Its already earned compensation."  Mastagni said city officials threaten bankruptcy as a bullying tactic anytime they do not get their way.  A ruling against Stockton would not be as damaging as the city contends, he said.
At the hearing the judge ordered the city to show cause by April 16, 2012 why the court should grant the POA's request for a temporary restraining order.  See more about the case here.

Article 11 of California's state constitution requires every county have an elected sheriff.  It also allows charter counties, such as San Francisco, to set their own rules for the removal of sheriffs and other officials.  San Francisco's Charter, in turn, proscribes a 5-step process for removal of elected officials guilty of "official misconduct":

Because these rules are set by San Francisco's Charter, other rules apply for removal of sheriffs in other counties.
Posted by Mastagni.com Law Blog at 7:30 PM

In Cate v. California State Personnel Bd. (Cal. Ct. App., Mar. 12, 2012, E053011) 2012 WL 810662, the Court of Appeal upheld the termination of a correctional officer accused of taunting a suicidal inmate. The Department terminated the officer, in part because he allegedly told another officer the inmate said “that she was going to hang herself” and he responded by saying “go ahead.” The inmate later attempted suicide.

On review, the Court of Appeal noted “the overriding consideration in these cases is the extent to which the employee’s conduct resulted in, or if repeated, is likely to result in, harm to the public service.” As a result, the Court decided against reducing the officer's punishment from termination to a 30-day suspension.
Posted by Mastagni.com Law Blog at 8:00 AM 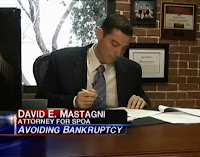 On March 9, 2012, ABC News 10 reported on the City of Stockton's failure to provide required financial documents to prove its alleged financial situation.  The Stockton Police Officers Association challenged the City of Stockton to prove its financial problems and stop withholding a mandatory Comprehensive Annual Financial Report or CAFR.  According to the report, city officials admit the report is months late, but have not provided it to labor groups ahead of the planned pre-bankruptcy mediation.  The report indicates the City is only willing to provide an unaudited version.  Mastagni Law attorney David E. Mastagni will represent the Stockton Police Officers Association in the pre-bankruptcy mediation.  See the full report here or below.

Posted by Mastagni.com Law Blog at 7:30 AM

On May 26, 2011, Florida's governor, Rick Scott, signed a bill unilaterally increasing public employees' contribution to that state's pension system by three percent (3%) and changing cost-of-living adjustments.  The bill effectively lowered all employees salaries and provided no new benefits to employees.  Florida's public employee labor unions never agreed to the changes and quickly filed a lawsuit challenging the constitutionality of the unilateral change to employees' pension benefits on Contract Clause grounds.  After initially losing an injunction, the employees' unions moved for summary judgment in late 2011.

The court found "the legislature is precluded... from abridging in any way the unconditional contract rights of the plaintiffs."  The court also found the three percent increase was "substantial as a matter of law" and noted the lifetime costs of employees ranged from tens to hundreds of thousands of dollars.  The court further stressed the state of Florida failed to prove a "compelling state interest" for the increase, noting "They merely produced evidence that the state faced a significant budget shortfall; this is not enough."  Indeed, the court noted the legislature could have made the same savings without violating its contract, but "All indications are that the Florida Legislature chose to effectuate the challenged provisions... in order to make funds available for other purposes."

As a result, the Court ordered the State to stop deducting the additional three percent from employees' salaries and reimburse millions of dollars withheld from employees since July 1, 2011.
Posted by Mastagni.com Law Blog at 9:00 AM