AB 86 was 86'd in the Assembly today.  Under the proposed bill, every officer-involved shooting would have to be reviewed by a special prosecutor appointed by the Attorney General.  This review would have been in addition to department and district attorney reviews.  The bill was among several bills that failed to advance through the Assembly Appropriations Committee earlier today.
Posted by Mastagni.com Law Blog at 4:22 PM 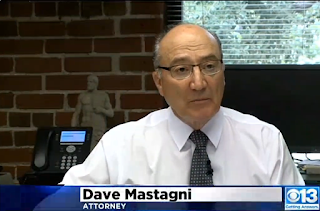 CBS13 interviewed Mastagni Holstedt partner David P. Mastagni about President Obama's call to limit military equipment in law enforcement agencies.  In the interview, Mastagni explained, "Obama's dead wrong" and the policy "is going to decrease public safety [and] put the public at risk, increase the risk of law enforcement officers' injury or death in the line of duty.  He explained, "the equipment that is necessary to meet and exceed the criminal threat is the type of equipment he is seeking to ban."
Posted by Mastagni.com Law Blog at 11:32 AM

The California Court of Appeal ruled statutory changes to workers' compensation injury presumptions apply to cases pending prior to the change in the statute. In doing so, the Court of Appeal overruled the Workers' Compensation Appeals Board ("WCAB") who refused to apply the presumption to a pending case. This decision could affect the presumptions involved in many workers compensation cases.
The facts of Lozano v. W.C.A.B. are tragic. William Lozano worked as a firefighter for a Department of Defense installation. Lozano was diagnosed with stomach cancer and succumbed to the disease in September of 2007. In November of 2009, Lozano's wife and two young children filed a workers compensation claim alleging the stomach cancer was work related.
On January 1, 2009 the legislature amended the Labor Code so that firefighters like Lozano could take advantage of the cancer presumption. This means the family would not need to prove Lozano's employment caused stomach cancer. Rather, the court would assume the cancer was from his employment and the employer would have to prove the cancer was not job related.
The Agreed Medical Examiner ("AME") concluded Lozano was exposed to carcinogens as part of his work activities. However, he could not conclusively say the carcinogens caused Lozano's cancer. However, if the firefighter cancer presumption applied to Lozano's case, the AME concluded the cancer should be presumed as work related.
The WCAB determined the presumption did not apply to Lozano's case. The WCAB noted Lozano was not a qualifying firefighter under the statute at the time of his death. The WCAB refused to apply the statutory change retroactively because the Legislature did not provide for retroactive application in the statute.
The Second District Court of Appeal reversed the WCAB's decision and held the presumption did apply to Lozano's claim. In general new statutes operate prospectively unless the Legislature clearly indicates otherwise. However, this general rule does not apply to new statutes that simply alter procedural or evidentiary statutes to trials occurring after enactment. Thus, if a new statute alters substantive legal rights, like who is liable for an injury, that statute cannot be applied retroactively. But, if the statute only alters procedural rights, like who has the burden of proof, the statute can be applied retroactively.
Here, the presumption test does not change who is liable for the injury, but rather who has the burden of producing evidence. Making the cancer presumption available to firefighters like Lozano only addresses the procedure to follow, not the substantive legal rights. Thus, the Court of Appeal overruled the WCAB and allowed Lozano's heirs to retroactively apply the cancer presumption.
This case should help a great number of public safety employees in the future. The instant statute only dealt with firefighters working at Department of Defense facilities. But the court's logic could be applied to any new statute which changes the evidentiary burdens for workers compensation claims. Thus, when the legislature changes the statute to help more people, any pending claims can take advantage of that new rule.
Posted by Mastagni.com Law Blog at 4:29 PM

The Illinois Supreme Court blocked an attack on state employees and their pensions when it upheld a lower court ruling on May 8, 2015. In Pension Reform Litigation v. Pat Quinn, the Court struck down a 2013 law aimed at slashing state-funded public employee pensions. The Court ruled the law violated the Illinois State Constitution’s contracts clause.

To meet growing concerns with its state-funded pensions and other budgetary issues, the Illinois state legislature passed Public Act 98-599. The heart of PA 98-599 aimed to cut state-funded pensions. The bill sought to delay eligibility for members. It also capped the maximum salary used to calculate benefits. PA 98-599 then tried to effectively reduce base pension amounts for some members. Senator Kwame Raoul, one of PA 98-599’s chief sponsors, characterized the bill as sacrificing state employee pensions to protect state finances.

Former Governor Pat Quinn signed PA 98-599 in 2013. Five separate lawsuits challenging the law’s validity were immediately filed. The lawsuits, all decided in this case, claimed that PA 98-599 violated Illinois’s contracts clause. Just like the California's contracts clause, the Illinois Constitution prohibits the impairment of state pensions. PA 98-599’s proponents characterized the bill as an exercise of the legislature’s emergency police powers. The Illinois Supreme Court disagreed. The Court ruled that the PA 98-599 violates the Illinois Constitution.

The Illinois Supreme Court warned against a slippery slope of unnecessarily using police powers. Writing for the Court, Justice Lloyd Karmeier instructed that emergency police powers must be reserved for true emergencies. If not, “no rights or property would be safe from the State. Today it is nullification of the right to retirement benefits. Tomorrow it could be renunciation of the duty to repay State obligations. Eventually, investment capital could be seized.” Justice Karmeier further explained that “crisis is not an excuse to abandon the rule of law. It is a summons to defend it.” The Court pointed to the possibility of raising taxes to meet the fund’s needs.


The Illinois pension victory represents just one battle in that state’s fight. Though the ruling came from the Midwest, the fallout hits close to home. Just like Chuck Reed here in California, Governor Bruce Rauner wants to amend the Illinois constitution so that he can gut state-funded pensions.

On May 7, 2015, the California Senate voted to ban the use of grand juries to investigate officer involved critical incidents. Specifically, Senate Bill 227 prohibits a grand jury from inquiring into an offense or misconduct that involves a shooting or the use of excessive force by a peace officer that lead to the death of a person being detained or arrested by the peace officer.

The bill passed the senate on May 7 by a vote of 23-12. All of the "yes" votes came from Senate Democrats. The bill now moves to the Assembly for further review.
Posted by Mastagni.com Law Blog at 12:05 PM

At retirement in 2009, Speer had accumulated 541 hours of unused vacation time. Speer also accrued 800 hours of unused sick leave. Combined, the unused benefits had a value of $53,513.  After cashing out the $53,513 at retirement, the City of Los Angeles reported that amount as income on Speer’s 2009 W-2. Since Speer earned some of the cashed out benefits while on temporary disability, Speer excluded the $53,313 from his 2009 income tax return.

The Tax Court disagreed with Speer. Citing Boyd v. City of Santa Ana, the Tax Court stated that compensation paid while on disability leave was not salary, but compensation for injuries. Since Speer could not take vacation or sick time during his temporary disability, he could not benefit from the accrued vacation or sick time while on disability. Speer’s only benefit from the accrued vacation and sick time came after his disability ended.  The Tax Court ruled that any payments received by Speer after his disability ended were not part of Speer’s Labor Code § 4850 compensation. Thus, the income tax exemptions did not apply to Speer’s cashed out leave.