A Riverside police officer who took disability retirement to avoid termination was “honorably retired,” according to the California Court of Appeal.  In Bonome v. City of Riverside, the court said the City must either grant the officer’s request for his retirement identification badge with a CCW endorsement, or provide a good cause hearing.

The officer’s attorney was able to set out the Skelly hearing.  This allowed Officer Bonome to complete his application for industrial disability retirement.  The termination proceedings were suspended when the retirement became official.

Shortly after, the Assistant Chief sent notice to Officer Bonome’s attorney saying the Department would not issue a CCW endorsement.  Additionally, the Department would not offer a good cause hearing.  According to the Chief, Officer Bonome was not “honorably retired.”  The officer brought suit seeking to compel the Chief to issue the retirement badge with a CCW endorsement, or provide a good cause hearing.

The case centered on the correct definition of an honorably retired peace officer.  Penal Code §16690 says an honorably retired peace officer is any officer who has qualified for, and had accepted a service or disability retirement.  However, this does not include officers who agreed to a service retirement in lieu of termination.  According to the City, the Legislature must have meant to exclude all officers who retired to avoid termination.  The Court was not persuaded.

Officer Bonome argued, and the Court agreed, he was an honorably retired peace officer.  The statute only excludes peace officers who take a service retirement in lieu of termination.  According to the Court, an officer cannot choose to take a disability retirement to avoid termination.  Either an officer is disabled, and unable to perform his or her duties, or not.  Officer Bonome was evaluated after sustaining an on-duty injury to his back, and the evaluation recommended a disability retirement.  The Chief’s intent to terminate was irrelevant.

The Court noted, the City does not have to grant the CCW endorsement.  Penal Code §25920 says CCW permits for honorably retired officers can be denied or revoked.  However, to do this the City must show good cause as to why.
Posted by Mastagni.com Law Blog at 9:55 AM

Court of Appeal: No Requirement to Meet and Confer on Citizen Sponsored Initiatives

In City of San Diego v. PERB, an appellate court said a citizen sponsored initiative to end pensions for new government employees did not require the city of San Diego (City) to meet and confer with the unions whose members would be affected.

In November of 2010 then Mayor of San Diego Jerry Sanders announced his plan to place a citizen sponsored initiative on the June 2012 ballot.  The initiative was called the Citizens Pension Reform Iniative (CPRI).  CPRI, if passed, would amend San Diego’s city charter.  The main effect of this amendment was eliminating the pension program for specified future employees, and replacing the program with a 401(k) plan.

Mayor Sanders, along with many prominent city employees, spent significant time and used considerable resources to gain support for the initiative.  Eventually, enough signatures were collected to place the matter on the June 2012 ballot.  Several unions demanded to meet and confer with City Council before CPRI was placed on the ballot.  If CPRI passed Mayor Sanders would have effectively ended future pensions for city employees without any discussion with union representatives.

Several affected unions filed an unfair labor practice charge with PERB.  The City claimed it had no discretion to keep CPRI off the ballot.  According to the City, Mayor Sanders was acting in his capacity as a private citizen.  Since this was was not a government action, they argued, there was no requirement to meet and confer.

PERB found Mayor Sanders was acting as an agent of the City.  Essentially, the City used one of its stronger political figures to create, support, and pass a citizen sponsored initiative.  By doing so the City bypassed the MMBA’s requirement to meet and confer, and ended the pension program for most of the City's future employees.  PERB found this to be a violation of the MMBA, and ordered the City to repay employees for lost compensation, including pension benefits.  The City appealed.

On appeal one of the main argument was over a 1984 case commonly referred to as Seal Beach.  Seal Beach declared, before a governing body can place a charter amendment on the ballot it must satisfy the meet-and-confer obligations under the MMBA.  The unions argued Seal Beach was applicable in the present case.  In other words, 33 years of precedent said governing bodies cannot bypass unions by placing charter amendments on the ballot which will impact the terms and conditions of employment.  The Appellate Court disagreed.

First, the decision dismissed any argument that mayor Sanders was acting as an agent of the City. Concluding CPRI was neither ratified by the City, nor an action of its agent, the court next addressed whether Seal Beach applied.

The decision said, what took place in San Diego was different from Seal Beach.  CPRI was a citizen sponsored initiative.  In Seal Beach, the city council was using its own authority to place matters on the ballot without an initiative.  Thus, CPRI was not a proposal by a governing body.  Accordingly, there was no obligation to meet and confer.

PERB's decisions are given significant deference on appeal.  Their factual findings are considered final if there is any substantial evidence to support them.  Despite this strong presumption, the court overturned PERB's decision.

Stay tuned as the unions are likely to seek review in the Supreme Court of California.

In her remarks, Storm explained, "AB 530 is important because it affects my clients' ability to enforce their collective bargaining rights and resolves serious uncertainty about the law."  She said, "superior court is too costly and results in justice being denied because unions can't afford to sue [but] there is a high rate of resolution [at PERB] because the agency is adept at analyzing labor disputes." 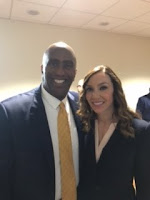 She also addressed "the uncertainty in section 3511 [of the MMBA]."  She explained the law is vague because it exempts from PERB's jurisdiction "persons who are peace officers" but does not define that term.  "As things stand now, if a peace officer labor leader experiences retaliation, there would be parts of the case that the union has to bring at PERB and other parts the labor leader would have to bring separately in superior court.  This legislation solves these problems."

On April 12, 2017, the California Supreme Court granted CAL FIRE Local 2881's petition for review of the First District Court of Appeal's decision on December 20, 2016 to uphold the elimination of the “airtime credit” benefit in the Public Employment Retirement Systems (“PERS”).

The most significant part of the previous decision by the  Court of Appeal for the First District was the court's decision to adopt the ruling in Marin Association of Public Employees v. Marin County Employees’ Retirement Association (MAPE) regarding the authority of the Legislature to reduce retirement benefits if they do not destroy the pension. The MAPE ruling broke with a half century of precedent holding that any modification of a pension resulting in a detriment must include an offsetting advantage.

The California Supreme Court has now granted review of both the MAPE and Cal Fire rulings. This is a significant opportunity to right the ship and overturn the damage these decisions did to the California vested rights doctrine.

Our office is currently representing two law enforcement associations in separate pension-related appeals in the First Appellate District, including the Alameda Deputy Sheriff's Association. 2017 continues to be an important year for determination of pension rights.

A bill in the State Senate could have a significant impact on public school employee unions.  Senator Pan (D-Sacramento) proposed SB 550.  The bill seeks to amend EERA section 3543.8.  If the amendment becomes law, unions would have the ability to seek attorney’s fees in actions over an employer’s failure to pay wages and benefits required by state law.

The key issue will be whether the action alleges that an employer did not pay state mandated wages or benefits.  If the union wins, and previously gave the employer 30 days-notice that they are seeking attorney’s fees, courts will be required to award reasonable fees and expenses to the union.  The employer would not be allowed to collect fees if the action does not prevail.

It is not clear which specific wages and fees are referred to in the bill.  One commentator has suggested SB 550 does not cover overtime for public school teachers because public employees are exempt from overtime laws in most cases.  Additionally, longevity pay and differentials are usually controlled by MOUs, and are not mandated by state law.