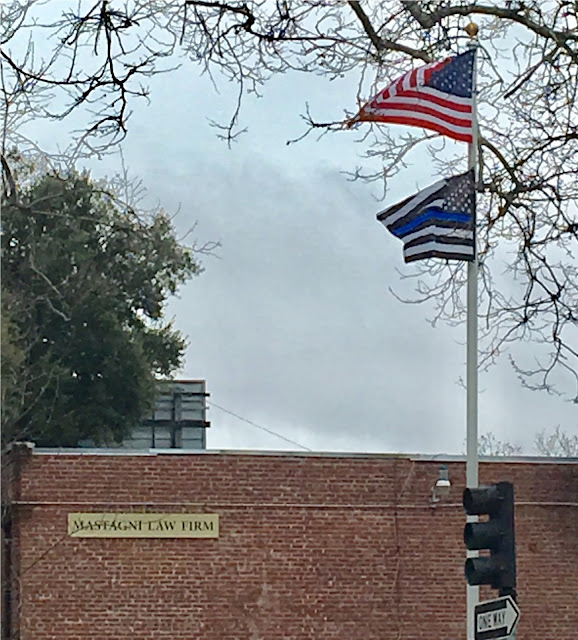 "The Thin Blue Line Flag represents our appreciation of and commitment to protecting law enforcement officers statewide," says David P. Mastagni.  "Law enforcement officers face new and unprecedented threats to their personal safety and we are proud to stand in solidarity with them, as we have for more than 40 years," he said.  Mastagni Holstedt is the largest law firm in California specializing in representing public safety professionals and their labor associations, with offices in Sacramento, Los Angeles, the San Francisco Bay Area, and the Inland Empire.
Posted by Mastagni.com Law Blog at 5:52 PM

Liverman v. City of Petersburg (2016) 844 F.3d 400, involved two police officers who were disciplined based on two posts they made on Facebook. The two officers made posts that were critical of the administration’s practice of promoting inexperienced police officers into management positions. The City’s policy prohibited employees from: 1) making comments that would reflect poorly upon the Department or the City and 2) making negative comments about the operations of the Department. The first policy attempted to qualify itself by essentially stating that the First Amendment would still be observed and officers could comment on issues of general or public concern so long as those comments did not interfere with working relationships, efficient work flow, or undermine public confidence in the Officers.

The comments were purportedly divisive within the department and some patrol officers sought transfers away from the two officers. The two officers were given an oral reprimand and six months probation, but were told that the discipline would not affect their eligibility for promotion. However, several weeks later, a department chief changed the qualifications for promotion such that officers on probation were prohibited from promoting. When the two officers sent notice of their intent to challenge the disciplinary action, they were immediately subjected to several additional investigations which would have resulted in termination. One of the officers retired before he could be terminated.

The two officers contested the social media policy in civil court arguing that the policy violated the First Amendment, and thus, their discipline and the subsequent retaliation should be overturned. The Court recited First Amendment law stating that public employees generally do not lose their rights to speak on matters of public concern, but the speech must be balanced against the interest of the state in promoting the efficiency of the public services it provides. The Court found that the social media policy at issue explicitly restricted speech criticizing the department.

The Court found it significant that the officers chose Facebook as their forum of choice which the court compared to writing into a newspaper's opinion section. By choosing Facebook, they were clearly showing an intention to communicate their concerns to the public, outside of the employment context. The Department did not establish a significant enough reason other than general concerns of divisiveness as to why such speech should be restricted. The “negative comments” policy did not contain the qualification which would permit comment on matters of public concern and was thus, unconstitutionally overbroad. Accordingly, the discipline against the employees was overturned and the Chief who imposed the discipline was denied qualified immunity because the law in this area was well-established.
Posted by Mastagni.com Law Blog at 7:30 AM