On September 12, 2019, Governor Gavin Newsom signed into law S.B. 230, which was introduced by Senator Anna Caballero (D-Salinas) on February 2, 2019.  S.B. 230 was sponsored by a law enforcement coalition, including PORAC, Cal Chiefs, and CAHP, to establish state-wide use of force policy and training standards.

S.B. 230 will help achieve better outcomes for everybody by providing officers clear guidelines and training on use of force.  The bill establishes first-in-the-nation use of force policy requirements for departments, as well as standardized training for all California public safety officers on force scenarios, including de-escalation, intervention and medical aid.  “California will set a new national standard that every other state can look to as a model when updating their own use of force policies,” Senator Caballero said in a statement.

S.B. 230 states that officers shall be guided by the principle of reverence for human life in all investigative, enforcement, and other contacts between officers and members of the public. S.B. 230  recognizes that officers are vested with the authority to use necessary force as determined by an objectively reasonable officer.   It also requires that an "officer may only use a level of force that they reasonably believe is proportional to the seriousness of the suspected offense or the reasonably perceived level of actual or threatened resistance."

Mastagni Holstedt attorneys David E. Mastagni, Kathleen Mastagni-Storm, and Josh Olander were privileged to assist PORAC in drafting this bill and lobbying for its enactment into law. 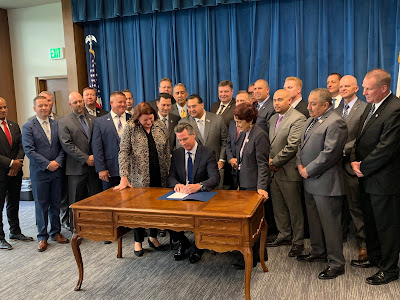 As covered by several media outlets, numerous per diem deputies in San Joaquin County did not report for work today. Per diem deputies are retirees that are routinely used to supplement Sheriff's Office staffing due to the inability to recruit and retain sufficient numbers of full time deputy sheriffs.

At the moment, San Joaquin Deputy Sheriff's have gone more than four years without a contract. There is currently a crisis of low staffing levels and high mandatory overtime rates. This has led to burn out and attrition problems.