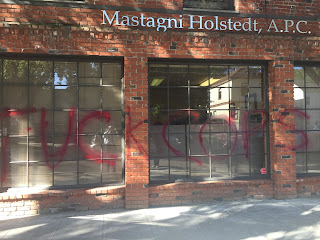 Law enforcement labor leaders and elected officials gathered Wednesday to take a stand against anti-law enforcement vandalism that was spray painted on the Sacramento headquarters of Mastagni Holstedt on Tuesday night.  The firm has flown the Thin Blue Line Flag under the American flag since February.  There were no incidents until Tuesday night.

David P. Mastagni explained to Fox40 that the vandalism appears to be in response to the firm lowering its Thin Blue Line flag to half mast to honor slain NYPD officer Miosotis Familia, whose funeral was Tuesday.

He said, "She was a beautiful young woman who had a full life ahead of her, she got shot in the head while sitting in a squad car, and the very least that me or any other citizen can do is respect and honor her for her service to her community.”

Interviewed in front of the vandalism, Mastagni noted, "those very words behind me are the words that have been chanted by anti-police antagonists across the country."  The vandalism occurred the same day as Officer Miosotis' funeral events, which some protesters tried to interrupt by blasting the song "F--- tha Police" at mourners.

Sacramento Police Officers Association President Tim Davis said, "It’s demeaning to our officers who put their life on the line everyday to protect our community.  We’re out here to tell officers that they are supported and that we’re not going to stand for this type of message."

Sacramento City Councilmember Steve Hansen helped out to remove the graffiti and told KCRA, "It's never okay and we all as a community have to take part in making sure that this doesn't continue."  Retired San Joaquin Sgt. Pat Withrow also came up to Sacramento to roll up his leaves and lend a hand.

Asked whether he'd take down the flag after the incident, Mastagni said, "Some people just have to stand up for what's right and that's why that flag is in the corner of that parking lot and it will continue to fly at half mast every single time an officer is killed in the line of duty."  The vandalism and the community response was also covered in the Sacramento Bee, the LA Times, and the local CBS affiliate.
Posted by Mastagni.com Law Blog at 4:02 PM